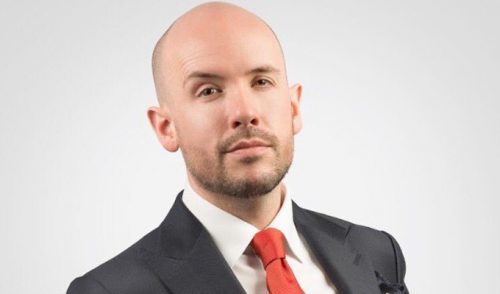 Enjoying comedy, whilst we continue to stay home at the moment, is vital.  The brilliantly funny, comedian and comedy host Tom Allen, is set to help.  He will be providing the commentary this Friday in his dry style for the Showstoppers’ Alternative Eurovision Show.  The corporate comedian and comedy host will be keeping us entertained. In addition he will be helping raise funds for the Care Workers’ Charity Emergency Fund in a tribute to the original event.  Eurovision was cancelled due to Covid 19 this year.

In addition Olivier Award winning musical comedy improvisation group, Showstoppers, will be performing. They will be performing in their own hugely entertaining style on line.  They will be joined by celebrity judges.  These include another corporate favourite, Christopher Biggins, and various other guest stars.

Tom Allen is an ideal choice for your next corporate event.  He is an acclaimed comedian, writer and actor and personalises his sets to the event for both cabaret and comedy hosting.  Having won the So You Think You’re Funny award at the Edinburgh comedy fringe and the BBC New Comedy Awards in the same year, Tom has gone on to appear on numerous comedy shows including 8 Out of 10 Cats Does Countdown,  Mock the Week and Celebrity Crystal Maze. He co-hosts Bake Off: The Professionals and joined  The Great British Bake Off: An Extra Slice as a regular contributor.