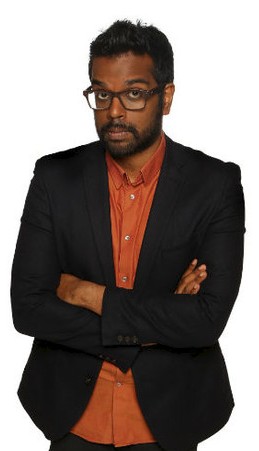 Comedian and presenter, Romesh Ranganathan, has been shortlisted for the Best Factual Entertainment Programme, The Misadventures of Romesh Ranganathan, at the 2020 Broadcast Awards.  In addition Taskmaster, starring two more hugely popular corporate performers, Greg Davies and Alex Horne, have also been nominated for another category – for Best Entertainment Programme.  The awards will be presented on 5th February, at the Grosvenor House, London by Harry Hill.

Romesh has recently co-hosted the Royal Variety Show with another corporate favourite, Rob Beckett.  The show will be screened in December.

Romesh is now a regular on the renowned A League of Their Own last year and his other television series include, Asian Provocateur (creating a wonderful comedy foil to his mother on his travels discovering his Sri Lankan roots), Ranganation, The Reluctant Landlord and Judge Romesh.

His sellout national tour, The Cynics Mixtape, is set to continue into 2020.  Next year Romesh will also be co-starring in Tom Davis’ BBC One sitcom, King Gary.

Together with his high profile and numerous projects, Romesh has a wonderful dry wit ideally suited to corporate comedy and as such he continues to be in huge demand for both cabaret and comedy hosting, both as a stand up comedian and as an accomplished host.